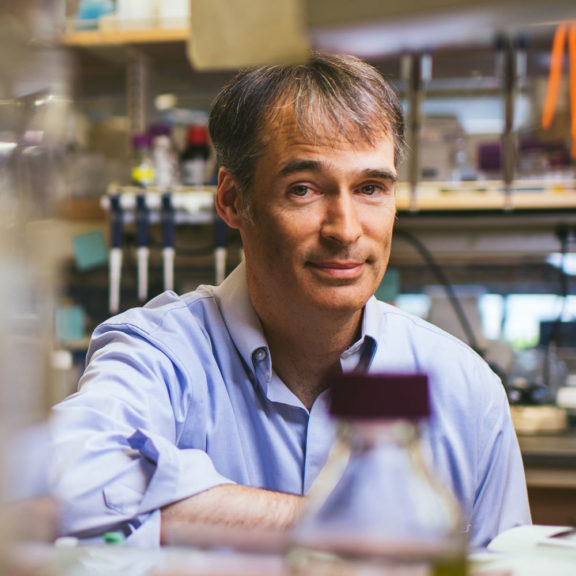 I envision a world in which mothers do not die of ovarian cancer, but live to watch their children and grandchildren grow up. We are working towards this goal by developing ways to prevent the disease, better tests to diagnose the disease at a curable stage, and new treatments to increase cure rates for those who do get the disease.
Ronald John Buckanovich, MD, PhD

Ronald Buckanovich graduated from Cornell University in 1990 with a B.S. in Genetics and Biochemistry. He then completed the Medical Scientist Training Program and started his life-long study of ovarian cancer. He received his Ph.D. in 1996 from the Rockefeller University and his M.D. in 1998 from Cornell University. Dr. Buckanovich then went on to complete an Internal Medicine residency and a Hematology-Oncology fellowship at the Hospital of the University of Pennsylvania. During his fellowship he continued his research on ovarian cancer, identifying dozens of novel clinical targets and helped to develop a novel therapeutic to enhance tumor vaccine therapy. Dr. Buckanovich joined the University of Michigan as an Assistant Professor of Internal Medicine in 2006. There he identified a novel population of cancer stem-like cells (CSCs) which may be responsible for ovarian cancer metastasis, chemotherapy resistance and ultimately disease recurrence. His laboratory is now studying the factors which regulate these CSCs including regulators of asymmetric division and quiescence. His laboratory has identified two novel compounds which directly target cancer stem cells; one which blocks the ability of these cells to metastasize, and a second which selectively kills the cancer stem-like cells. Both of these drugs are now being developed for first in human clinical trials.

In addition to his laboratory studies, Dr. Buckanovich has a busy clinical practice, specializing in the treatment of ovarian and uterine cancers. He is currently the principal investigator of two clinical trials at the University of Pittsburgh. He has been an author or co-author of 60 original research articles. In recognition of his work, Dr. Buckanovich received a Clinical Investigator Award from the Damon Runyon Cancer Research Foundation, the National Institutes of Health New Innovator – Directors Award, Society of Gynecologic Oncology Best Basic Science Award, and he has been elected to the American Society of Clinical Investigators.

Cancer stem cells (CSC) are rare, inherently chemoresistant cells, which have the capacity to divide both symmetrically (creating more CSC) or asymmetrically (generating non CSC cancer cells and tumor heterogeneity). CSC are hypothesized to be the primary source of cancer metastasis, recurrence and ultimately a patients demise. The primary objective of my laboratory is to understand regulators of cancer stem cell proliferation and division patterns with the goal of developing novel therapeutics targeting CSC. In order to complete these studies, in collaboration with Euisik Yoon, we have developed novel in vitro microfluidics devices as a means to study symmetric vs asymmetric divisions of CSC, regulators of CSC, and mediators of CSC quiescence. In addition we are developing and novel humanizes stroma tumor model. We believe that this tumor model, by virtue of having a human tumor stroma, more accurately

Jun 24, 2019
Dr. Ron Buckanovich: Getting to the Root of Ovarian Cancer